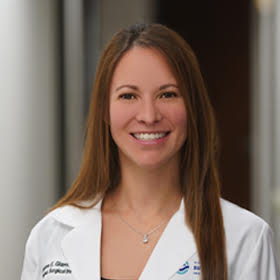 Dr. Glanville prides herself on her years of volunteer service, research experience, and various publications in per-reviewed medical journals, books, and abstracts, including in Annals of Surgical Oncology, Surgery, and Journal of Pancreas. She maintains her professional membership in several scientific societies, including the American Association of Endocrine Surgeons, the American College of Surgeons Resident Member, and the American Medical Student Association.

Dr. Glanville received her Doctorate of Medicine from the Ponce School of Medicine before starting her residency at the University of Medicine and Dentistry of New Jersey where she worked her way up from Intern Preliminary General Surgery Resident to General Surgery Chief Resident. She then became an Endocrine Surgery Fellow at the National Cancer Institute in Bethesda, MD. She later joined Stephen G. Pereira, M.D. and Associates as an Advanced GI MIS Fellow with a primary focus on robotic GI surgery.

Dr. Glanville enjoys spending time with her family and friends, going to festivals, taking her dogs to the park, and watching movies. Raised in Puerto Rico, Dr Glanville is also bilingual.

MEDARVA Stony Point Surgery Center's nurses and board certified physicians have years of training, expertise and experience to care for your specific medical condition. State-of-the-art procedures and anesthetic techniques speed recovery time and expedite your return to work and other activities.